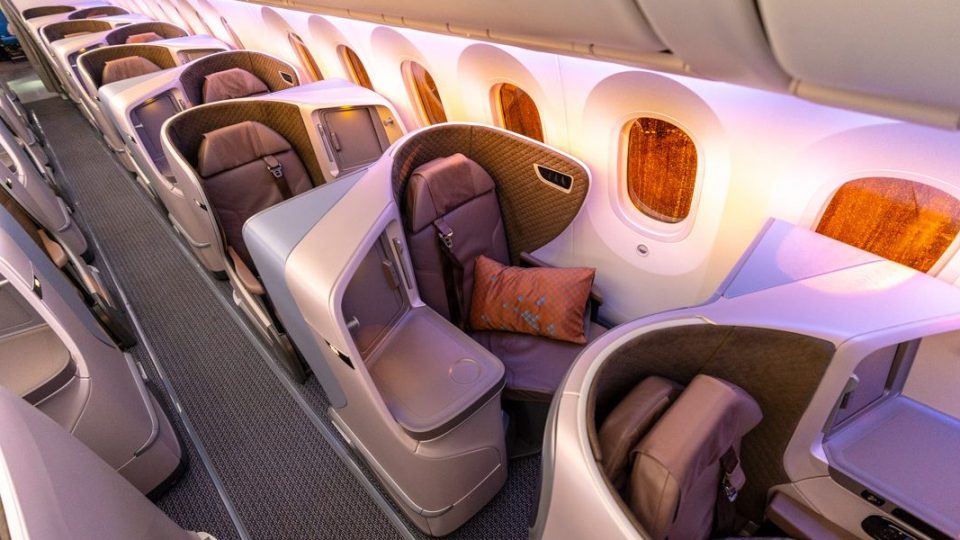 Would I chose this night time flight again just to fly the 787-10? Most definitely not! Even though it’s one of the most comfortable regional business class cabins, the flight time is just to short for you to get any quality sleep. I much rather have a morning flight lounging around the far less superior A330.

Singapore Airlines has had a busy year! While launching one of the most spacious first class suites to date on the A380 (combined with a new business class cabin), the airline was also prepping the launch of their new Boeing 787-10. The 787-10 is designed to operate regional flights and some short-haul trips such as the 5h flight from Singapore to Perth. 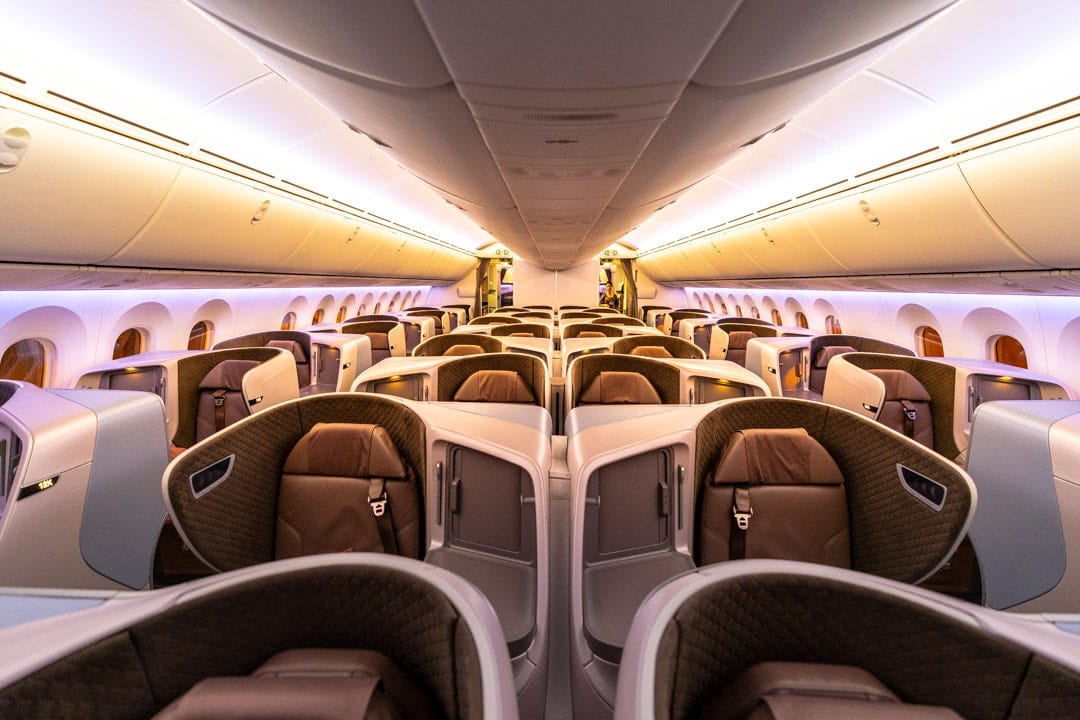 The new 787-10 is equipped with 36 business class seats in a 1-2-1 configuration which is a vast improvement over their current A330’s on the Perth to Singapore route, running in 2-2-2.

The 787-10’s business class cabin has a staggered design, so everyone has direct aisle access, and all seats alternate the position of the console as you will see in the pictures. This set-up allows for enough room so all seats can go entirely flat.

Taking a red-eye flight is never fun (even in business class) but I needed to position myself to Colombo for my Emirates (new) 777 first class flight, so this was a perfect excuse to test out the new product. If you really must try the 787, consider booking it on the return leg as it also runs on the 6:45 PM flight which is a perfect time to fly. When flying to Europe, I usually book the 6:25 AM flight since it gets you into Singapore around lunch time and leaves you the rest of the day to explore the city before catching your long-haul flight around midnight.

From Perth, you could fly to most asian destinations (Bangkok, Hong Kong, Ho Chi Minh City etc) for only 32,500 Kris Flyer miles + less than $100 in taxes. (one way)

Considering the Singapore Airlines lounge is one of the saddest lounges around, I will spare you the pictures and jump straight to the boarding part of the flight which happened in the downstairs area.

Thanks to the friendly Singapore Airlines crew I was allowed to board 5 minutes early to get a few pictures of the empty cabin. 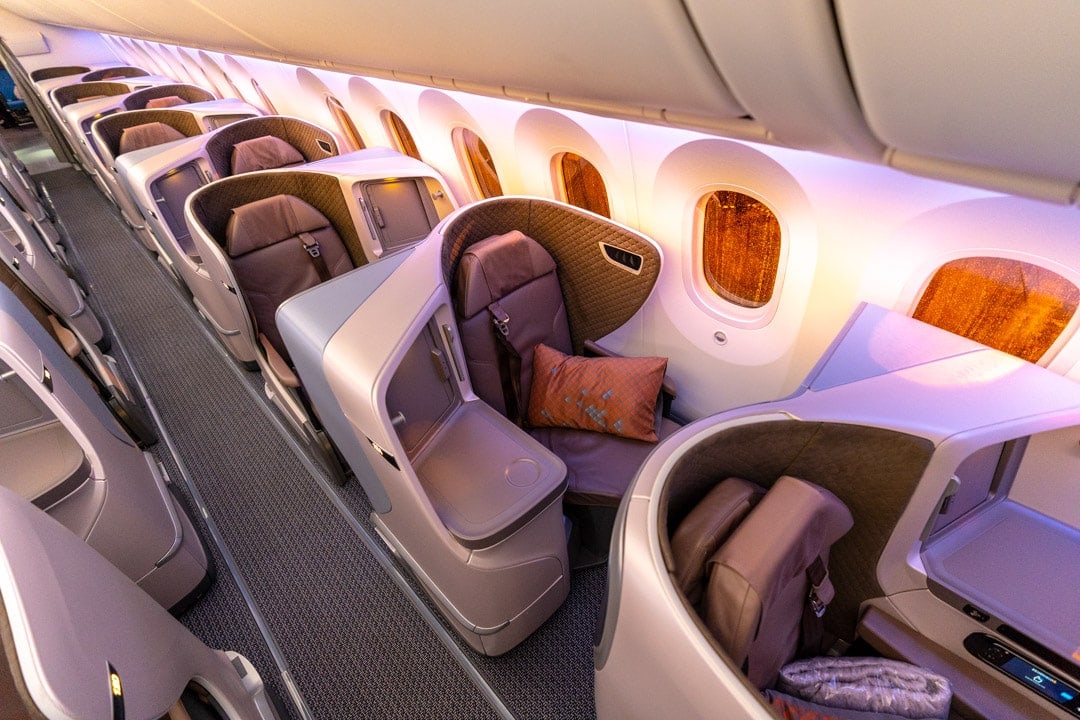 I opted for a glass of champagne for my pre-departure beverage and looked over the menu which was slightly disappointing. The redeye flight has a “snack” type menu if you prefer to eat right after takeoff or a breakfast option if you want to be woken up a few hours before landing. Considering the short flight time, you really can’t win…so don’t expect to arrive rested. 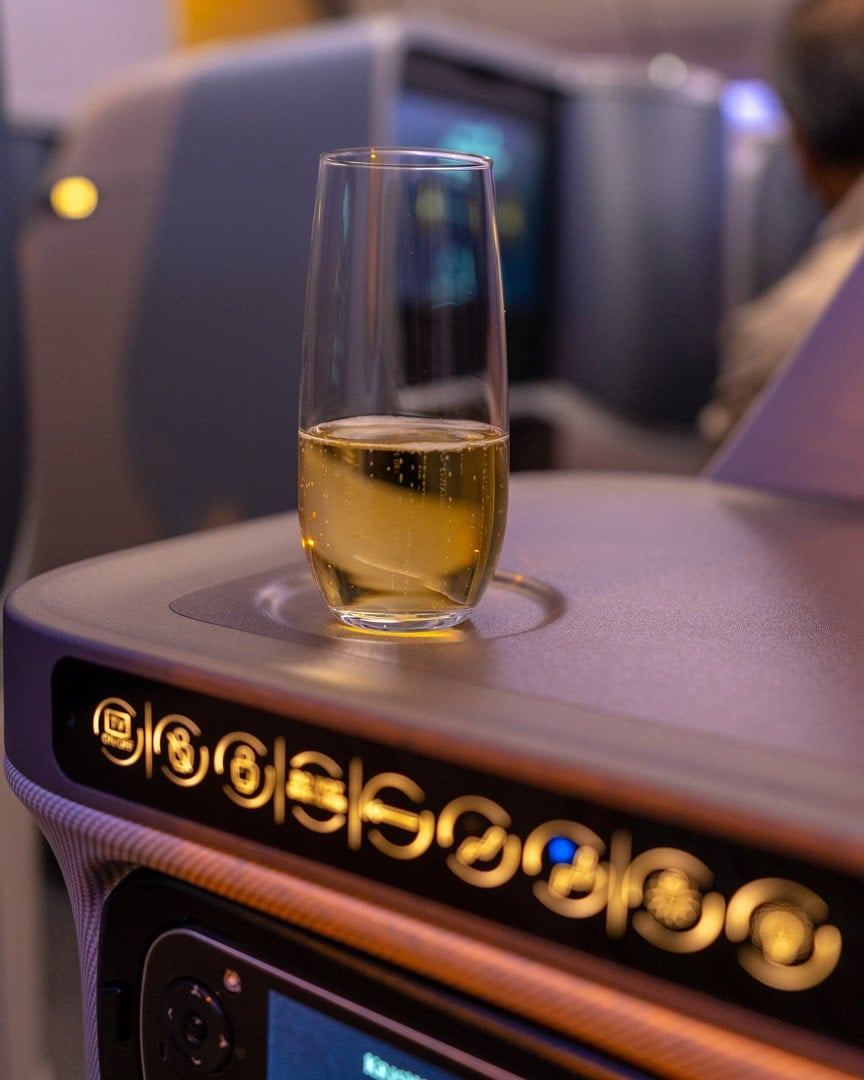 The Best Seats On Singapore Airlines 787-10 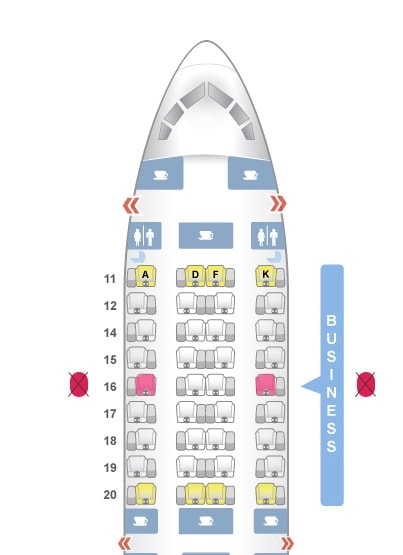 11A and 11K are behind the bulkhead and also have a designated space for a bassinet. If you require extra space, grab one of these seats as the empty bassinet area doubles as storage space. However, keep in mind these seats are directly next to the lavatories.

There are only 8 real window seats thanks to the staggered configuration. These are also my favourite as you get more privacy (further away from the aisle) and slightly more space due to the curvature of the aircraft walls. These seats are 12A, 12K, 15A, 15K, 17A, 17K, 19A or 19K.

The best seat would be 12 or 15 which are close to the front (faster service) but not too close to be bothered by the lavatories.

Seats to avoid would be 16A and 16K since neither of these has a window.

The all new business class seats are designed by Stelia Aerospace and recline into a 193cm flatbed. The seats are 66cm wide, but you will get a few extra centimetres if you go for the direct window seats as these allow you to flex your elbows a bit.

I was impressed by the design and attention to detail, from the suede upholstery of the privacy shell to the leather details of the seat itself. It’s very well done, as I would expect from Singapore Airlines.

Although the seat is much narrower compared to the 777-300/200 and A380, it’s perfectly suitable for its intended use; which is short-haul and regional flights.

Storage space on the 787-10 isn’t huge but acceptable. The drinks table on the side of the seat is large and has a small storage space attached to it which is big enough to keep your phone etc.

The built-in retractable mirror is there to remind you about the redeye benefits of your flight upon landing, and of course, power supplies are present to charge your devices.

On the table side of the seat is a touchscreen remote control for the 18″ Panasonic entertainment system and an array of shortcuts to position your chair and adjust the lighting.

The touchscreen display on the 787-10 is fantastic and powered by Panasonic’s eX3 system. Singapore Airlines has a huge content library, so there’s always something for everyone. The display itself is adjustable so you can angle it downwards when you’re in bed. This is ideal as it gives you a pleasant viewing angle with accurate colours and blacks.

The most important feature on a red-eye flight is (of course) the bed. After dinner, I attempted to recline the seat, but for some reason it still felt slightly angled. After checking with the crew if the seat was really just an angled recliner, they assured me it would go entirely flat.

It took a good 15 minutes of the crew disassembling my seat to find a water bottle was lodged within the mechanism from the previous passenger.
While other airlines would probably tell you “sorry” and “deal with it”, Singapore crew always take great pride in their service and their capabilities to solve a technical issue. Since the seat got fixed, I didn’t really see the need for a service recovery, but to my surprise upon landing the cabin manager presented me with a $150 Singapore Airlines voucher (which is the standard compensation if something is broken in business class).

In terms of comfort, the bed is actually really good. There are no mattresses provided on these short flights, but you can hack one together by asking for a spare blanket. As a stomach sleeper the seat was a bit narrow but selecting a direct windows seat will ensure you’re not squashed in against the side table. The armrest of the chair also goes down, thus providing a bit more space to stretch out.

Would I chose this night time flight again just to fly the 787-10? Most definitely not! Even though it’s one of the most comfortable regional business class cabins, the flight time is just to short for you to get any quality sleep. I much rather have a morning flight lounging around the far less superior A330.

Additionally, the 777-200 is actually a better product in my opinion since the seat is so much wider, especially if you can secure a bulkhead seat. So for future flights, I will definitely try to book the 787 on the return to enjoy a full dinner service.