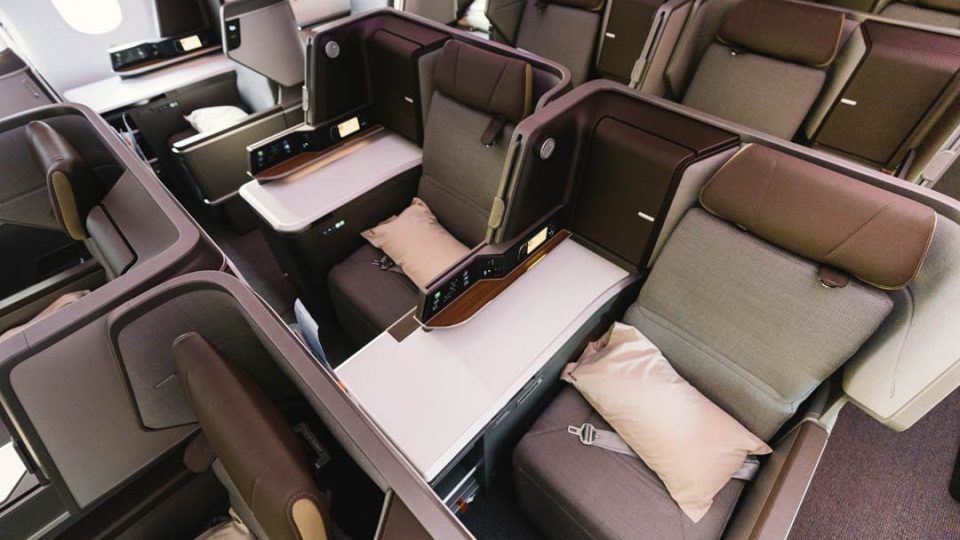 The EVA 787 is very easy on the eyes and one of the more picturesque business class seats in the market. Although I personally don’t like this seat type and prefer the reverse herringbone design, I can understand some people prefer this as it’s easier to get in and out of.

When Eva Air announced they would take delivery of their first 787-9 from Boeing in October 2018 they also announced a new business class cabin design (Royal Laurel) by BMW which features the same Vantage XL seat which Qantas uses on their A330’s and B787. 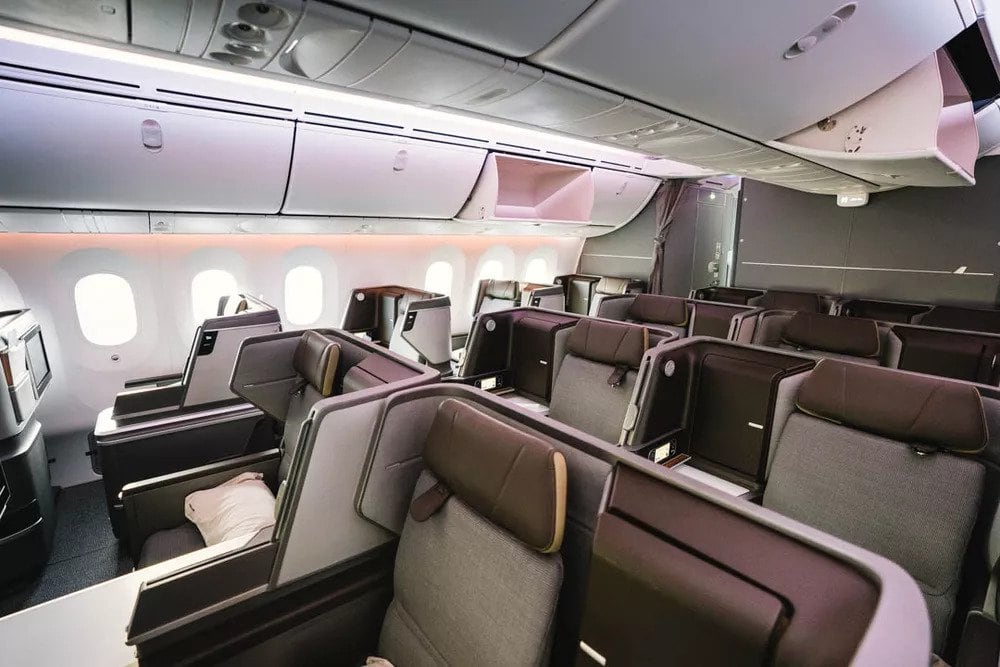 Personally, I’m not a fan of the Vantage XL seat design because it’s really uncomfortable to lounge in. The mechanics of the seat are designed in such a way that you can’t really move one part without moving another. 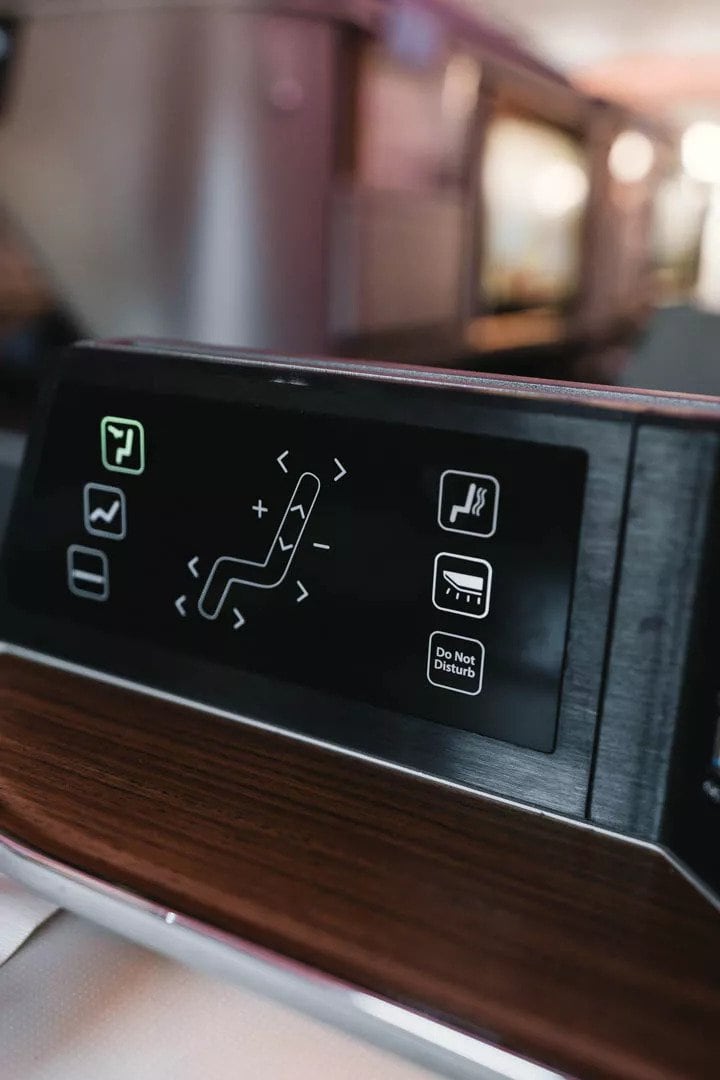 For sleeping, however, it’s perfectly flat although a tad close to the ground (that’s me being picky). 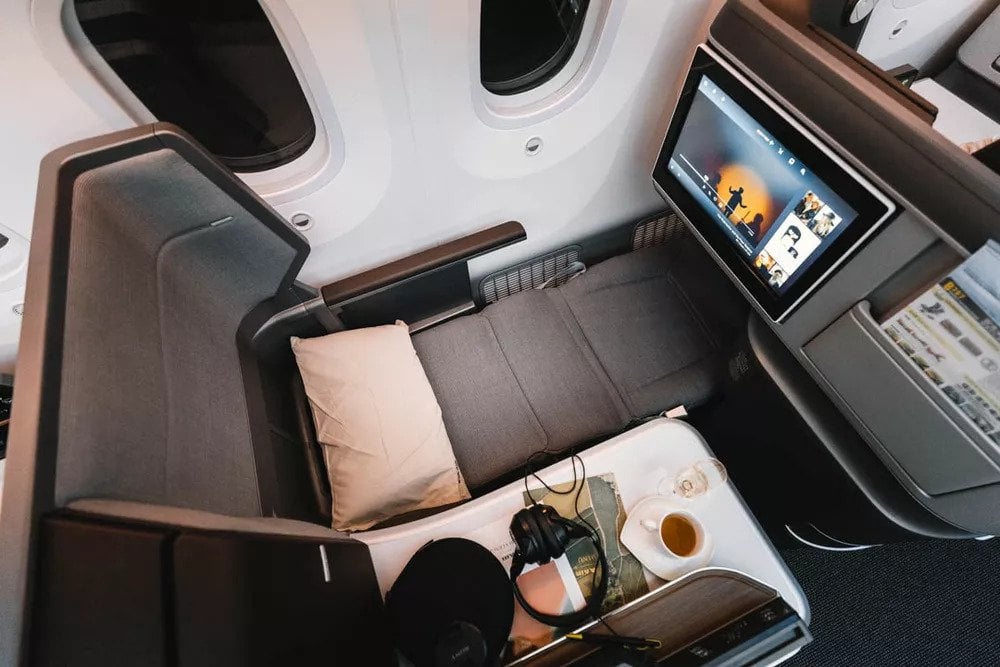 Anyway, from the renders put forward by the BMW design team it looked like EVA Air definitely went for the premium option, and to me, it looks much more stylish compared to Marc Newson’s Qantas design. 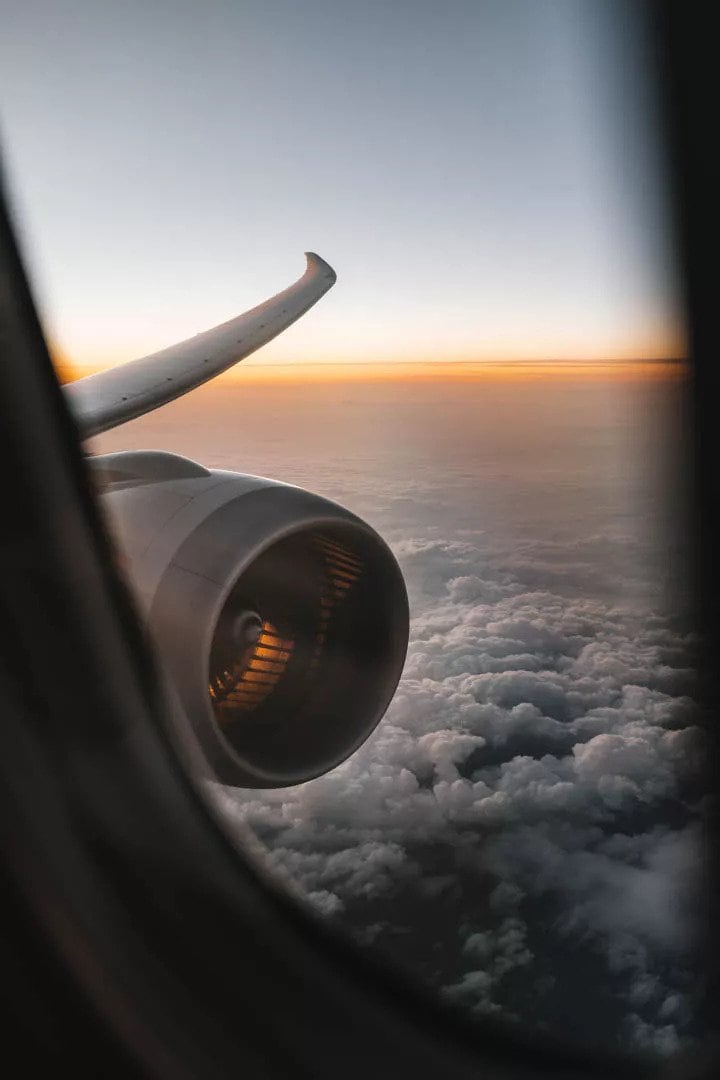 Eva Air is based in Taiwan and part of Star Alliance, for this particular ticket, I decided to pay cash using a $400 Amex travel credit which was going unused. The total ticket price was $1194.50 for the following itinerary: Hong Kong – Taipei – Ho Chi Minh City.

Since EVA Air only flies the new aircraft on the short Hong Kong to Taipei route I figured I’d tag on an extra leg on the older 777 going to Vietnam so I could compare. After my Amex travel credit, the total cost for the itinerary came down to $794.5.

Checking in at Hong Kong airport was a breeze, and 2 minutes later I was on my way through the Hong Kong security line. Even though Hong Kong is one of the most efficient airports in the world, it would be nice to get a priority line for business and first class passengers.

EVA Air uses the Hong Kong Airlines lounge VIP lounge near Gate 23. The lounge was completely full, and considering I arrived late at the airport, I didn’t have time to do a proper review. From first impressions, it’s not a terrible lounge but nothing exciting either. If I did have more time, I would have made my way to the Amex Centurion Lounge which gives access to those with an American Express Platinum card.

Boarding was fast and efficient, once onboard the crew introduced themselves while offering pre-departure beverages.

EVA Air is well known for their Hello Kitty themed aeroplane liveries and this concept is also present in their boarding music. Having never flown EVA Air before I wasn’t sure if the music being played was a “one-off” due to Chinese new year or a standard thing. On all the IFE monitors there was a Bad Badtz Maru Chinese new year clip rolling which was in conjunction with music that sounded like the Nyan cat music on repeat (if you want to get a sense of what that’s like, I couldn’t find what they were actually playing).

I’m still undecided whether I loved or hated it. Probably a mix of both.

As I mentioned earlier, the seat and cabin layout are identical to Qantas but where EVA have set the bar higher is on the design and final styling.

The whole package looks really sleek and modern thanks to the grey/brown colour palette with a touch of green (EVA brand colour which is subtly applied to small details such as button and lights along with a leather detail in the headrest.

It really works, and overall I think it looks much classier than the Qantas design; let’s not mention the Malaysia Airlines Vantage Xl iteration which in my humble opinion is the ugly duckling of the bunch.

EVA Air has also opted to include a privacy divider in all the seats which means the person sitting across the aisle won’t be able to see your futile attempts of trying to eat rice with chopsticks during turbulence.

The seat is covered with breathable woven material and looks very nice in light grey. Once full reclined, the bed is completely flat, and the foot cubby hole provides ample space (193cm long bed which is 58.4cm wide).

There’s ample space to store and charge your gadgets and a small makeup mirror is hidden behind the headphones storage compartment.

The dining table is large and both suitable for dining or working while the side table could also store your laptop in case you wanted to get out of your seat.

EVA Air has also included a star display in the roof of the cabin which is very relaxing to look at in conjunction with all the mood lighting features of the 787.

Overall the crew were very nice and proactive when it came to offering drinks and taking food orders even though we were on a short 1h30 something minute flight.

The food and drinks menus looked very lovely (design wise) and although the food was nothing compared to what Qatar Airways pulls off, it was tasty and presented well. Considering the flight time, I had zero complaints.

EVA Air’s wine list is also impressive with a good selection of wines and the very drinkable Delamotte Blac de Blancs 2007 vintage champagne on offer which retails for $155 in Australia.

Eva opted for a new 18inch HD monitor with touchscreen capabilities. It’s designed well and snappy to operate. The selection of movies on offer wasn’t anything to write home about but substantial enough to entertain most. There’s also a set of noise cancelling headphones on offer which although not as comfortable as my Bose QC35’s; did the job.

There aren’t really any bad seats on the new EVA Air B787-9, but in general, I would avoid the first and last row due to the proximity to the galley/toilets.

The seats on the 787-9 are all staggered which means for window seats; there’s an alternating pattern of those with direct window views and those with direct aisle access. I personally like to sit right next to the window and have the large side table “shielding” me from the walkway for extra privacy.

However, some people might prefer the direct aisle access since it means you won’t have to squeeze past the side table.

The same is the case for those sitting in the middle, where one side will have direct aisle access and the other side a side table between them and the aisle.

I’ve highlighted all the seats which offer direct window views + those in the middle with the side table offering more privacy in green. Toilets are in the back, so I would avoid those.

The EVA 787 is very easy on the eyes and one of the more picturesque business class seats in the market. Although I personally don’t like this seat type and prefer the reverse herringbone design, I can understand some people prefer this as it’s easier to get in and out of.

For the short flight, I was impressed with the F&B offering, and the crew were friendly and attentive. Unfortunately, there are no Rimowa amenity kits on this flight which means I’ll have to fly EVA on a long haul sometime in the future.