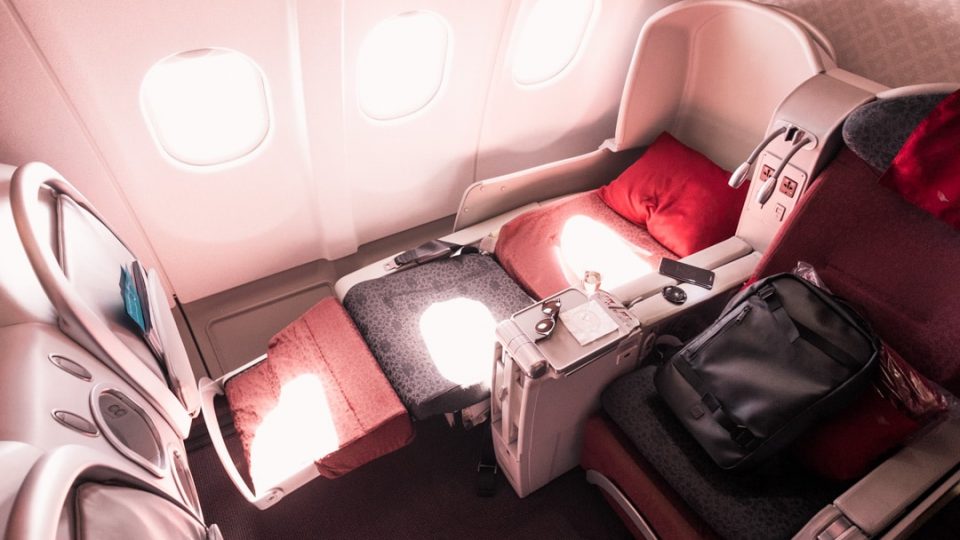 In my opinion, GA’s service from Perth to Bali is the best option if you’re after a relaxing flight in business class. Tickets are competitively priced and almost always cheaper when booked with third-party providers.

Flying from Perth to Bali doesn’t have to be uncomfortable (I’m looking at you JetStar), the only direct service offering a business class cabin that doesn’t consist of a simple recliner (you will find these on Malindo Air or Air Asia) is Garuda Indonesia on board their A330-200. 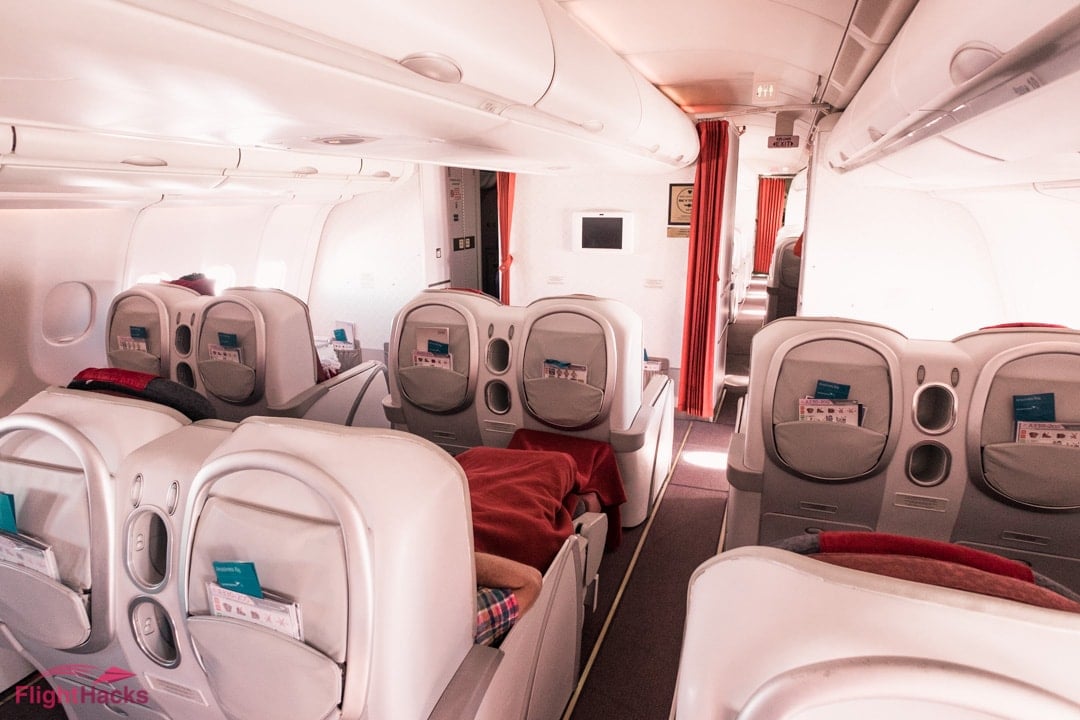 There are a couple of options when it comes to booking Garuda Indonesia’s business class product from Perth to Denpasar, Indonesia. The first one is the most straightforward (and the option I decided on) and consists of parting with your hard-earned cash. Luckily business class flights on this route are very reasonably priced, and on most days you will be able to snap up a return ticket for just over $800.

I recommend using a flight search engine such as Momondo to price up your ticket and book through a third party vendor as I found them to be cheaper than going directly through Garuda Indonesia. For a simple route such as this one it really doesn’t matter who you book with since there is not much that can go wrong (no connections etc.). I think for a 3h40m min flight it’s not so unreasonable, especially when you compare similar length flights from Perth to Melbourne which will set you back around $2000 return in business.

Etihad Airways has a few interesting partners, and one of those is Garuda Indonesia. Luckily for Australian point collectors, it’s relatively easy to accrue Etihad Guest miles thanks to American Express and Flybuys.

Perth to Denpasar Bali happens to fall in the sweet spot of 1600 miles one way or 3200 miles return. By looking at the Etihad Guest partner award chart for Garuda operated flights we can learn that a one-way business class ticket will set us back 28,000 Etihad Guest miles or 56,000 for a return.

The hardest part is figuring out when award flights are made available by Garuda to its partners. On multiple occasions I used the Garuda award search engine to look up availability, when I found the flights I was looking for, I would call up the Etihad Guest contact centre to get the flights ticketed, but every time they were unable to see the same award seats.

The only way to get these flights ticketed is over the phone (+61 1300 532 215), they are happy to check the dates for you so at this stage that’s the most reliable option.

Another way that you should be able to find award space on Garuda Indonesia is by using the Delta Airways award search engine which is one of the more “robust” options. Considering Delta Airways is a Skyteam airline just like Garuda one would assume that it would be able to see Garuda Flights but for my trials, it didn’t give me the results I was hoping for.

After calling several times for different random dates as far as a year out, I must conclude that there’s either a technical error or Garuda is actively blocking this route which is possible considering that they charge a lot more miles for the same redemption.

I was travelling at the time when the Mt Agung volcano caused a lot of travellers to cancel their plans so naturally, the check in was very quick and painless! Garuda has a dedicated line for business class and SkyTeam elites at Perth airport, so check-in is a breeze. 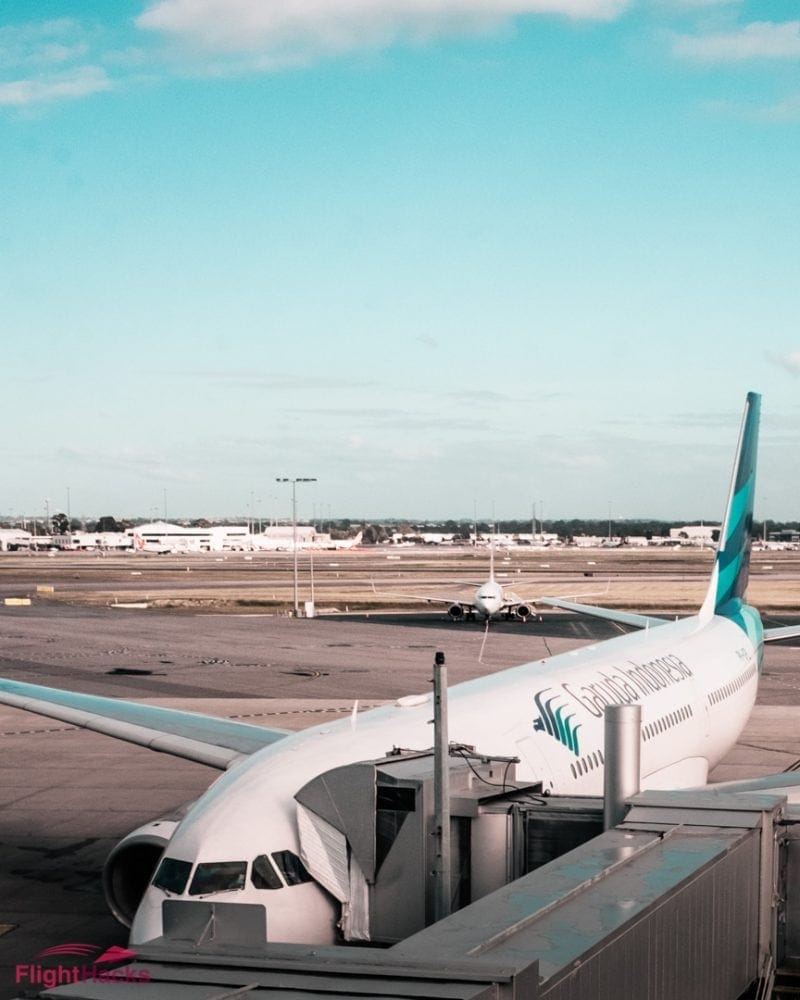 There are no SkyTeam or Garuda operated lounges in Perth, so instead, they buy lounge space from Qantas at Perth T1. Unfortunately, the recent renovations have halved the space in the QF lounge as there is a new Air New Zealand Star Alliance lounge being built next door. Although the Qantas lounge has a great new marble front desk, the same aesthetics are gone when you enter the lounge, and it’s rather cramped with no views of the runway.

Boarding commenced, and luckily there was an economy and business/elite status lane, although there was no signage indicating this, the lane was empty so for me the obvious choice was to use it. I did notice that other business passengers patiently queued in the economy line.

Once on board I was greeted by the friendly Garuda team who offered a hot towel and pre-departure drinks. As boarding came to completion, I noticed that the front half of the business class cabin was full while the section in the back was empty. Since the layout is 2-2-2, I decided to leave my front seat and opt for an empty row down the back which was much more private.

The A330-200 on the way to Bali was configured with the oldest type of sloping flat beds available on the Garuda fleet, you can tell this by the position of the entertainment system, while the old seat has fold-out displays the newer ones have the screens built into the seat in front. Although the seat itself is identical, it’s nice to have a bigger monitor to watch movies.

For such a short flight, the seat is pretty comfortable and perfect for lounging, even though it doesn’t go fully flat, you can still have a semi-comfortable nap to make up for the early departure. Considering the lack of competition in the premium cabin space on this route, it’s the best one can get.

On the morning flight from Perth to Bali, I decided on the french toast with fruit compote which was OK and well presented. As a started, fresh fruit, yoghurt and pastries were served. Garuda Indonesia used to serve Billecart Salmon NV in business class which is one of my favourite NV champagnes but unfortunately thanks to cost cutting they have opted to stock the not so impressive Mumm NV. Still drinkable so I figured it would be rude not to have a glass!

On the return flight, there was only one choice of started which was sliced duck breast with sambal matah lawar vegetables and bean sprout. Unfortunately, the duck was rather dry and the presentation not that impressive. For my main, I went for the lamb cutlets which were surprisingly edible.

The Best Seats In Garuda A330-200 Business Class

All the business class seats on the A330-200 jets are very spacious when it comes to legroom, so the only reason I wouldn’t opt for the front row is that you will have a flip out TV screen instead of a built in option on the newer planes.

The front cabin is the most desirable space since it’s the furthest away from potential screaming babies in the economy bassinets, but I found that Garuda seems to allocate everyone in the front cabin, leaving the second business class cabin empty. My strategy is to book a seat in row 2 and if you get assigned a neighbour, just move down the back where there’s plenty of space.

Stay away from row 3 or 4 unless you want to sit close to the galley and toilets. Row 6 can be good or bad, don’t book it in advance but go by ear after boarding. If you don’t hear any screaming babies, snap up a seat in row 6 if you want the most amount of privacy.

In my opinion, GA’s service from Perth to Bali is the best option if you’re after a relaxing flight in business class. Tickets are competitively priced and almost always cheaper when booked with third-party providers. On top of that, you can also earn miles and status credits with Etihad Guest since it’s a Garuda partner. The flight times are also very good, getting you to your location just before lunchtime and in time for an early check-in at your hotel depending on traffic!