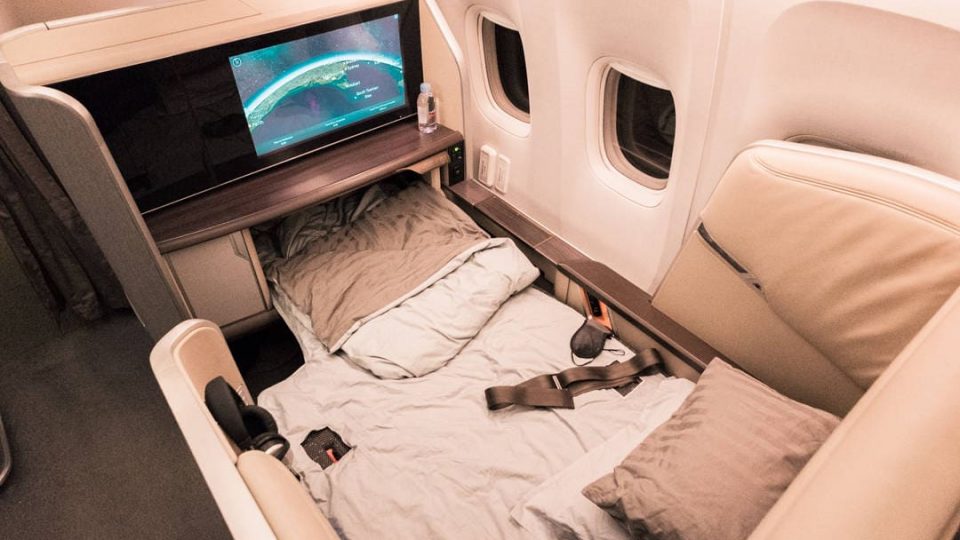 I’m a huge fan of the new design direction Singapore Airlines has taken with the new business and first class seats. Even though this is not the same as the a380 suites, I do think that aesthetically the first class cabin on the 777 is much sleeker, sophisticated and design focused.

Singapore Airlines has almost completed its refurbishment of their 777-300/ER (Extended Range) fleet which is by far their biggest compared to other aircraft on offer such as the A380, A330 and the new A350.

You’ll find this aircraft on the SIN-MEL, and SIN-SYD routes and my flight from Singapore to Melbourne was no different. Having just tried out the Singapore Airlines A380 suites from Hong Kong to Singapore, I was looking forward to spending some quality time in the newly refurbished 777-300er first class cabin. 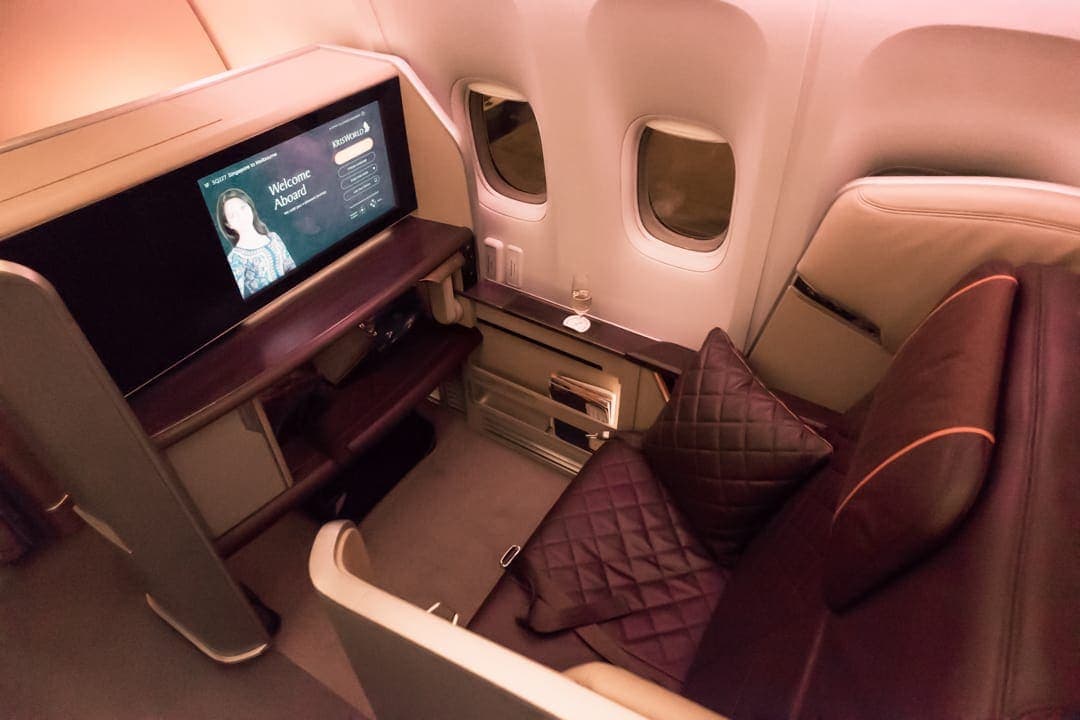 To book this flight, I used my American Express Membership Rewards points and transferred those to Singapore Airlines KrisFlyer program. The transfer is done at a 1:1 ratio. Typically a transfer takes 24-48h after which you can log into your KrisFlyer account and book your flights online. Make sure you select the “Saver” fare as the other option is much more expensive.

If you’re looking for the best credit card for earning KrisFlyer miles, you can’t go past the American Express Explorer (s) which earns KrisFlyer miles at 1.5 miles per dollar spent.

Last year I flew the new 773er business class seats to Europe and I was super impressed, they are by far my favourite business class in the sky and arguably better than some first class offered by the competition.

This time around my trip was in first class, and the new seat did not disappoint! The new first class cabin on the Singapore Airlines 777-300ER is very private and only contains 4 seats (down from 8), this makes for very personal service as there are 2 full-time flight attendants assigned to looking after first class passengers. 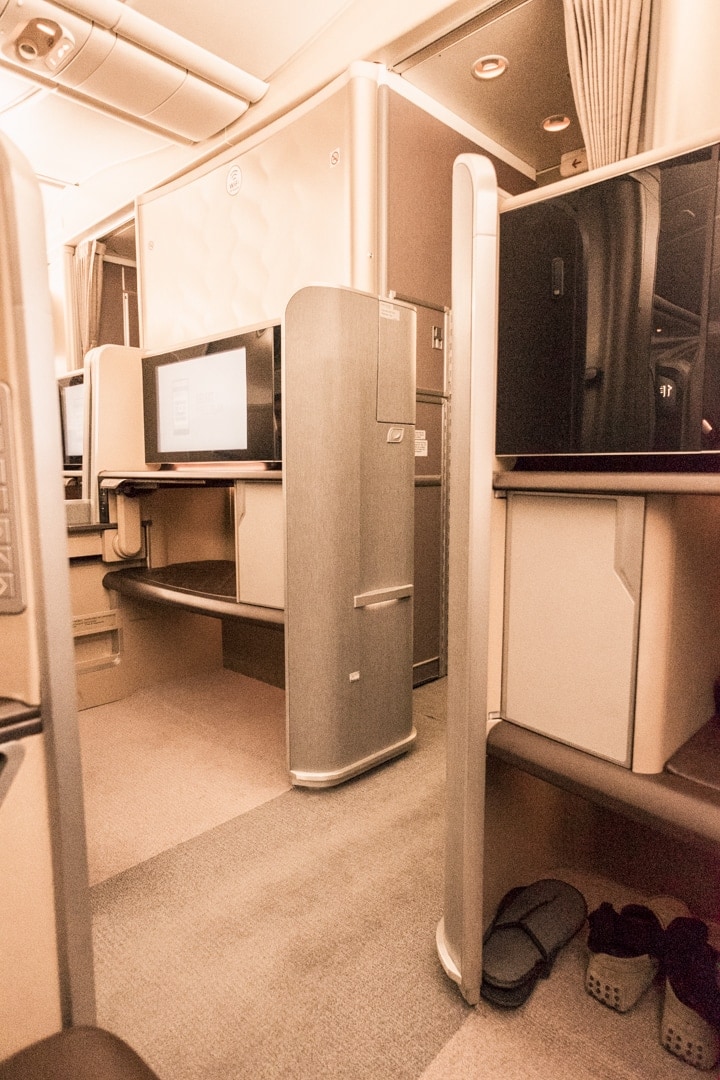 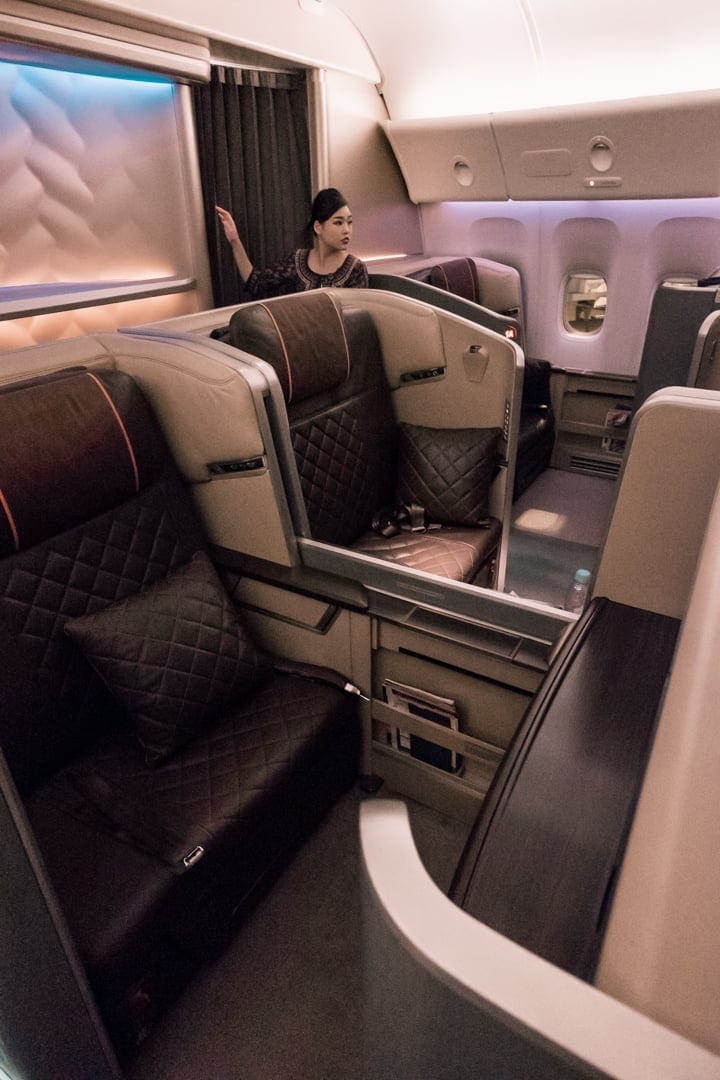 The cabin is laid out in a 1-2-1 configuration with 2 first class toilets in the front – yes that’s right, you will only be sharing the toilet with 1 other person!

People traveling together might want to opt for the middle seats which have a privacy screen that can be lowered. On my flight, 2 of the other seats were taken which didn’t give me the opportunity to take a good picture of the middle section.

This first-class seat is MASSIVE, size wise I would say it’s on par with Cathay Pacific’s first class seat and maybe even slightly wider. Sleep is a guarantee; there’s even room to spread out. 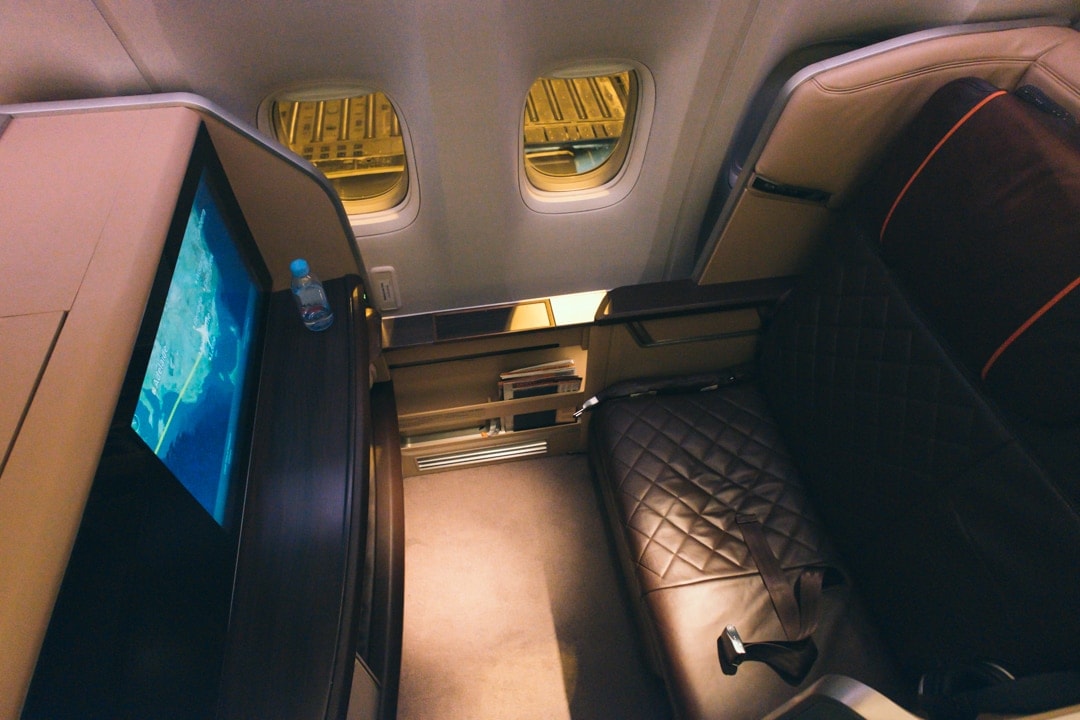 Storage is of course not a problem, there’s ample space under the ottoman for your carry-on luggage, and there are a few small compartments where you can store valuables. In-seat power supplies are also present so you will be able to charge your laptop and phone at the same time, no problemo.
The new first class seat on board Singapore Airline’s 777-300er has a very similar design to the business class version in that it flips over into a bed when you’re ready for a nap. The seat is comfortable enough for lounging and dining but won’t recline all the way.
When you’re ready for bed, the friendly Singapore Airlines crew will make your bed with a mattress topper for extra comfort. I found the bed to be very comfortable to sleep in, but the Cathay Pacific mattress topper has a bit more cushioning.

The TV monitor is fixed into the screen, and it’s a perfect size for binging on a few crappy TV shows you probably wouldn’t watch on the ground (Kardashians anyone?). However, when you’re in bed mode, the angle is not ideal as the brightness and contrast changes make the screen appear darker. The entertainment is controlled by a touch screen remote which also has its own display and stowed on the left side of your seat.

After a stint of food poisoning (courtesy of Hilton Paris CDG), I opted to stay away from alcoholic temptations Singapore Airlines has on offer. Dom or Krug is probably one of the first questions you get asked when boarding Singapore Airlines first class; I’m a fan of both!

Singapore Airlines allows you to “Book the Cook” on most flights and the menu you find online is extensive, to say the least. This is not like Qantas advanced food ordering system where you have the choice of 2-3 dishes, Book the Cook has more than 45 different options including breakfast and dinner!

Singapore has announced it will now offer Book the Cook from October 1st on Perth to Singapore flights.

Book the Cook offers business, and first class travellers the option of ordering the “legendary” lobster Thermidor (half in business and whole in first – pro tip: It’s called Boston Lobster in First), which from experience is hit and miss. On this occasion I found that Singapore Airlines had completely dropped their lobster game; it was almost inedible.

To start off, I opted for the Chilled Malossol Caviar with Melba toast and condiments and skipped the soups and salads, going straight for the lobster.

For dessert, I had the Chocolate Gateau with fresh berries and mocha creme sauce and ice cream. Singapore Airlines serves TWG tea on board, so I had plenty of peppermint tea to compensate for the champagne.

Due to favourable (well not so favourable when you’re flying first class!) winds flying towards Australia, our flight time got reduced from 8+ hours to just over 6! I asked the crew to not wake me up for breakfast so I could get some solid sleep before landing in Melbourne around 6 AM.

Singapore Airlines offers pyjamas only to first class passengers, and they’re one of my favourite ones when comparing to Emirates and Cathay Pacific PJ’s. Even though Cathay has organic ones and Emirates has PJ’s made out of seaweed, I found the Singapore offer was slightly better fitting with the arm and leg cuffs keeping them in place which I found more comfortable.

Oh, BTW. If you’re one of those people on the fence about wearing PJ’s in first or feel slightly awkward about looking like a dork. It’s totally worth it; comfort level is instantly increased by 100%

Singapore Airlines also has a nice amenity kit with full-size Ferragamo perfume and plenty of toiletries on hand if you need it.
This year, Singapore Airlines is celebrating it’s 70th anniversary and offers a limited edition “Travel Gift Pack” to first class passengers which contains fabric decreaser and fabric fresheners – a rather odd way to celebrate 70 years but hey, I’m not judging…

Landing into Melbourne, the crew handed out express passes to clear immigration and in under 15 mins I had my luggage and proceeded to the domestic terminal to catch my Qantas A330 business class flight back to Perth.

I’m a huge fan of the new design direction Singapore Airlines has taken with the new business and first class seats. Even though this is not the same as the a380 suites, I do think that aesthetically the first class cabin on the 777 is much sleeker, sophisticated and design focused. The seats are extremely large and comfortable, and privacy is more than adequate, in-seat and especially because the cabin only has 4 passengers (max).